Skip to content
A special live mini-series from the Wireless Watchdog franchise; Ken's People showcased the people of New Zealand and Britain in the lead up to New Year 2019. It is now available in the podcast library.

Listeners to the Wireless Watchdog programme will remember with fondness, the segment Ken’s People, where we showcased the emotionally moving stories of people in the New Zealand community.

This special three part series saw Kenny Ardouin return to the airwaves to interview the people who call New Zealand home in three extended programmes. Kenny spoke to his guests about the year that was 2018, as well as their goals and ambitions for 2019, and their thoughts on where politics, science and technology may take us over the next 12 months. The live interviews were also interspersed by music especially curated for this series.

The programme also included a special segment Best of British curated in London, England, where Kenny spoke with some of those who live in the UK who are making the world a better place.

As always, the programme hosted by Kenny Ardouin, brought honest, open and opinionated discussion on issues affecting those in New Zealand (and the United Kingdom) free of any corporate and governmental influence.

The programme was live on Plains FM 96.9 and streamed through your favourite app from 11am each day from Thursday 27th December. The programme is now available in the Wireless Watchdog Podcast Library, on Apple Podcasts, and Spotify. 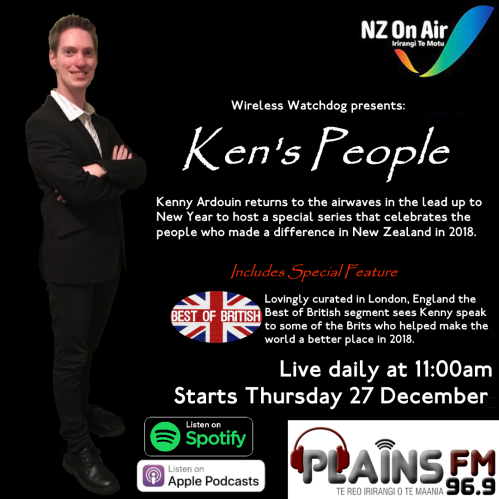